Meatballs! I love them so much. I used to buy a bag of frozen meatballs at Ikea on every visit but then sometime in the last couple years they started to seem different, different texture or something. I stopped buying them but I never bothered to figure out a replacement to the handy little dinner-savers! Sunset saved me!

This soup was delicious, but I am super excited about the meatballs included in the soup!  They are pretty dang close to those Swedish meatballs I miss so much and I highly recommend doubling the meatball portion of this recipe and freezing them for later (you better believe that I did)!  Throw them into a soup or warm them up in the oven to have with roast veggies, or with mashed potatoes, gravy, and lingonberries!

Okay but back to the soup.  This was in the December issue of Sunset, in a feature that was singing the praises of the under appreciated Savoy Cabbage.  I fixated on the meatballs and decided to make this immediately.  Requiring few ingredients (even the meatballs are simple) and a super satisfying end result, I will be making this again for sure.

This recipe does make a lot of soup so you could freeze half (like I did) or just cut it in half. I made the full amount but doubled the meatballs.  Here is the original proportioned recipe.

First things first, make the meatballs!! Heat the oven to 400 degrees.  In a medium bowl, stir together bread crumbs and milk. Add 1/2 tsp. each salt and pepper, 1/4 tsp. nutmeg, 1 Tbsp. parsley, the pork, and the beef. Mix gently but thoroughly with your hands. Scoop mixture by slightly rounded teaspoons and roll into small balls, plopping them onto a cookie sheet as you go, about an inch or so apart.  Cook in the oven for about 12-15 minutes until internal temp is 160. (Double this part if you want to stockpile them in your freezer!)

Melt butter in a large pot over medium heat. Add carrots and leeks and cook, stirring, until leeks are soft but not browned, 8 to 10 minutes.

Stir in cabbage and remaining 1/4 tsp. each salt and pepper and cook until slightly wilted, about 5 minutes.  (It looks like way too much cabbage, but it shrinks down I promise.)

Add broth, bring to a boil, reduce to a simmer and let simmer until cabbage is quite tender, about 20 minutes.

Gently stir browned meatballs into soup and cook, stirring occasionally, until meatballs are warmed up and flavors are blended, about 5 minutes. Stir in cream, 3 tbsp. parsley, and remaining 1/8 tsp. nutmeg (take a microplaner to a whole nutmeg if you want an extra flavor boost!) and ladle into bowls. Sprinkle with remaining 1 Tbsp. parsley. 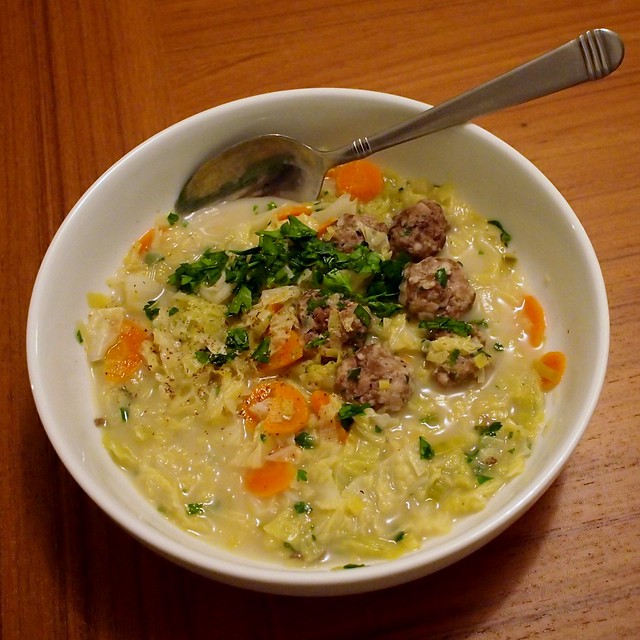 Posted by Michelle Suzanne at 10:14 AM