This is no groundbreaking feat of a stew, but it was easy, quick, cheap, just a tad spicy (my mister did not even kick up a fuss), and super comforting on a freezing cold November night.  I tend to think of black bean soups as either too boring-just a cup full of beans, or super Mexican flavored.  This was somewhere else on the spectrum.  Not too spicy, not too much of my beloved Cumin, no chili powder to be found, no cilantro or lime either. What really grabbed my interest was the addition of orange zest right at the end, it just sounded so good and different and I just had to make it right away.

This Black Bean Stew in particular, was noted as a quick stew to help you shed pounds, as this stew is packed full of protein and fiber from the beans and then the spiciness from the chipotle is supposed to be good at curbing appetite and boosting calorie-burning.  Who can say no to that? Add in some other fresh veggies and you are golden.

I made a few changes and additions, but nothing too crazy. Instead of roasting the pepper and slicing it up, I diced it up and cooked it in the pot. I liked this change because the peppers kept up a bit of their crunch.  I also threw in a diced sweet potato that I had laying around and it also was a great addition, due to the texture and slight sweetness, but I would not have missed it much if I had left it out (and if I did leave it out, I would have used two bell peppers, one each of orange and red). This is a great base soup that could easily be modified in tons of ways.  The absolute best part is the orange zest, it really livens up the dish, adding a hint of summer to this cold weather staple.

Heat Canola oil in a Dutch oven or other soup pot over medium heat.

Add to the pot the black beans, tomatos, broth, minced chipotle, and cumin.  Bring to a boil and reduce to a simmer.  Taste broth and add salt and pepper to taste.

Simmer 20 minutes until the sweet potatoes are tender.  Toss in the shredded kale, fresh thyme, and orange zest.  Ladel into bowls and top with diced avocado.  Enjoy! 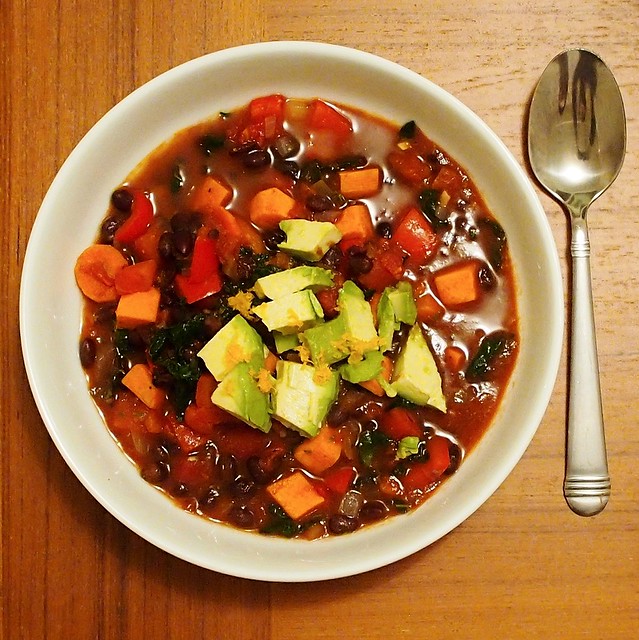 p.s. This photo looks terrible. I think I must have accidentally changed some setting without noticing, but I was so anxious to eat that I didn't bother messing with it. Forgive me?

Posted by Michelle Suzanne at 2:33 PM