Let's just get one thing straight right off the bat.  This post is all about the Fresh Corn Polenta.  When I stumbled across this recipe I thought - must try, immediately.  This recipe is the epitome of summer.  I'd say if it didn't require turning on the stove (for like 10 minutes, tops) it might be the king of the summer recipes.  But we can't all be perfect, can we?  Anyhow, please do give this recipe a go.  It requires little work, few ingredients, and a huge pay off.  Summer corn is one of life's simple pleasures and this, this my friends, is the way to highlight it.

As I grated the corn for the polenta I had one of those "no duh" moments with the realization that the starch that's hiding in the cob of the corn pockets is what naturally thickens this polenta right up.  I mean, where the heck did I think corn starch comes from? Tomatoes? Don't answer that.

I decided to top my polenta off with some super simple chicken marinated in BBQ sauce and a sautee of rainbow chard.  I dressed the chard with red pepper flakes and balsamic to give it some heat and acid to bounce off the super sweet corn polenta.  This meal was so good.  I give it two very enthusiastic thumbs up.


Clean the corn, removing all husks and silk threads. Working over a bowl, grate the corn using the large grate side of a box grater.  You will end up with a pulpy wet mixture.  Melt the butter and olive oil in a saucepan over medium heat.  Add the grated corn, stir in some salt and pepper. Allow mixture to cook over medium low heat, stirring it often so it doesn't burn, until it becomes thick.  Serve immediately with some grated parmesan, if using.

To make a full meal of this, add whatever sauteed green suits your fancy and some protein.  Really you can't go wrong with whatever you decide to whip up and add on top.  Happy Summer! 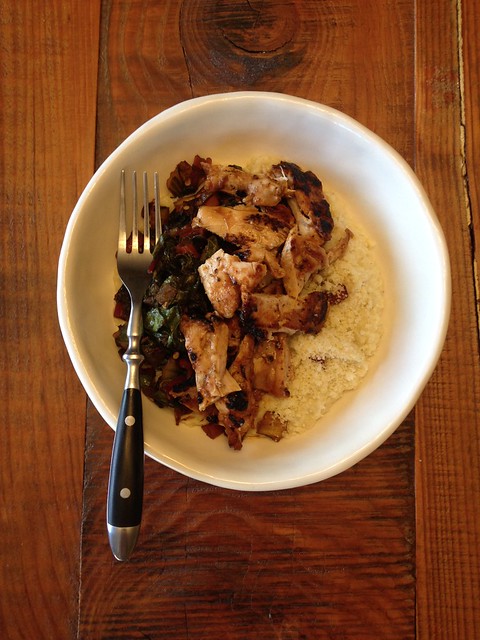 Posted by Vanessa Marie at 2:52 PM No comments:

This soup was super easy and fast to make, not to mention very light, flavorful, and fresh!  A perfect soup for summer. I even ate it after it got cold because I took too long trying to take a picture, and it was still slurptastic.

The original recipe called this Green Minestrone, but I am not too sure what makes it a minestrone. Also, I was pretty set on eliminating the pasta entirely and wanted either potatoes (would be delicious) or white beans (was voted in by my mister) instead, so a renaming seemed appropriate.

Heat 2 Tbsp. oil in a large heavy pot over medium heat. Toss in the leek, fennel, yellow onion, and celery, stirring occasionally, until softened but not taking on any color, about 5 minutes.
Add broth and bring to a boil.  Reduce heat and simmer until vegetables are just tender, 10-15 minutes.
Add carrots, peas, and beans, and simmer until carrots are just tender and peas and beans are warmed through, about 5-10 minutes.  Season with salt and pepper.
While your soup is simmering, blend parsley, the remaining 4 Tbsp. oil, and the chopped shallot with an immersion blender into a paste.  Season this pesto with salt and pepper.
Serve soup topped with a scoop of pesto, sliced red onions, and shaved parmesan.  Don't forget a good loaf of bread for dunking!

One more note:
When I put away the leftovers, I mixed the rest of the pesto into the soup and when we ate it on the second day, I made parmesan croutons to put into the soup with the leftover bread, which worked wonderfully and would have photographed better than the shaved parm. To make these, dice up your bread, toss it with olive oil and a tiny bit of salt. Spread on a parchment-lined cookie sheet and shred some parmesan on top.  Put into a 425 degree oven for about 10-15 minutes until the cheese is all melty and slightly browned. I almost ate all of the croutons before they had a chance to go into the soup! 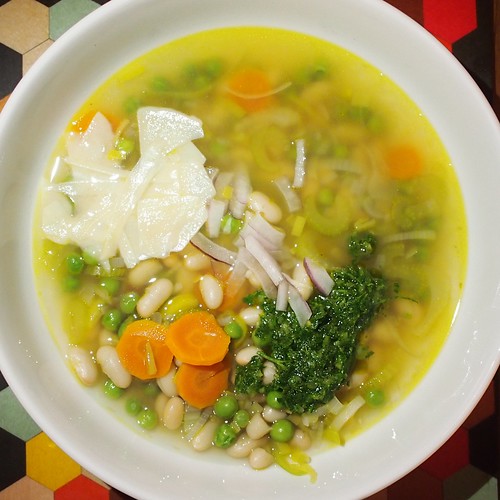 Posted by Michelle Suzanne at 10:58 AM 2 comments: