I have not been sick in a very long time, so I guess you could say I had it coming.  When I started to have that tickly throat, extra tired, stuffy head feeling, I made this soup in an effort to ward off the impending plague.  It didn't quite work, unfortunately, but this soup was delicious, and it did make me feel a little better.  I even declared that I could eat it every day.   The recipe is simple and comes together so fast and with minimal prep, that even if you would rather be sitting on the couch watching Scandal than cooking dinner, you can whip it up without batting an eye and get back to cozy couch times, with this soup keeping you company.

I used more mushrooms than the recipe originally called for, because why the heck not. I also used chicken stock that I had made over the weekend instead of veggie broth, but if you did use veggie broth this would be vegan. The Sriracha is optional, and add more if you like spicy. I used only 1 teaspoon and it was just perfect. You could always add a little more when you serve it for varying spice preferences. Thinking about this soup is making me hungry! I wish I had more of this soup to eat right now!

Stir in the garlic and ginger (and Sriracha, if using), cooking for another minute. Next, add in the soy sauce and stir, scraping up any parts of mushrooms stuck to the pan and continuing to cook for another 2 to 3 minutes. The mushrooms should be softening and smelling delicious.
Next add in the broth and bring to a boil, then reduce to a simmer, and add the noodles and greens. Cook until the noodles are tender, 5 to 6 minutes.

Remove from heat and serve with a sprinkle of sesame seeds. 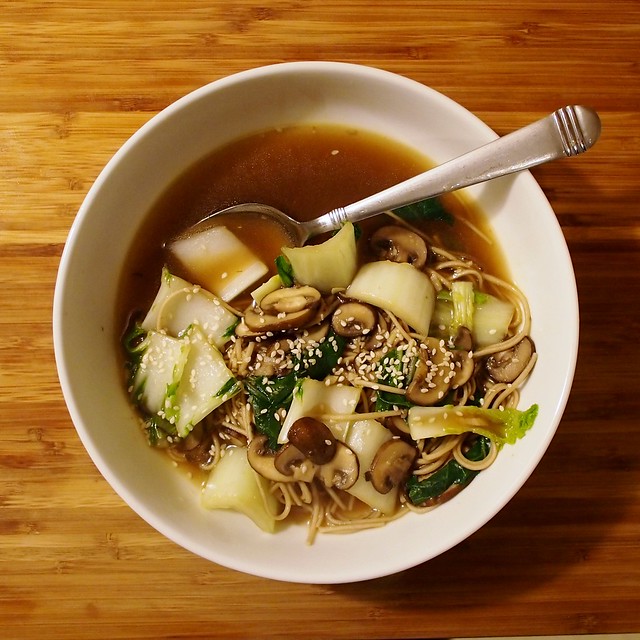 Posted by Michelle Suzanne at 12:29 PM