After getting back home from a two week long trip overseas I was dying to cook, bake, clean.  Basically all things domestic were calling my name.  I was also expecting to get home to some chilly fall weather here in Portland.  But as it turned out it's still fairly sunny and hot here so I decided to milk a little bit more summer fare out of the dwindling days.

As you can see here; I'm pretty into corn.  Especially summer corn.  So I saw this recipe and decided to go for it.  I also am such a novice when it comes to scallops.  I'd never even eaten a scallop until probably 3 years ago and I've never cooked them - until now.  Turns out they are super simple and the satisfaction you get from searing one off and seeing the caramelization is deeply gratifying.

I changed a couple of things on this recipe.  Mainly I used coconut milk instead of cream and subbed olive oil for the butter to make it dairy free.  I also cut down on one of the jalapeno peppers thinking it'd be too spicy but in retrospect that was a mistake so I've listed it back to the original two.  I hope you enjoy this, be it these last weeks of summer, or maybe save it for next year!

Melt the oil over medium heat in a large heavy pot or dutch oven. Add in the onion and jalapeño and cook for 5 to 7 minutes, or until soft but not brown. Add in the garlic and the corn kernels and cook for another minute or until fragrant, making sure that the garlic doesn't burn.  Pour in the chicken stock and coconut milk and add the corn cobs. Season with a few large pinches of salt and pepper. Bring soup to a boil, lower to a simmer, and cook for about 45 minutes.  Discard the cobs and blend the soup until smooth. Check for seasoning and add more salt and pepper if needed.  Ladle the soup into a shallow bowl and top with seared scallops. Soup can also be cooled and refrigerated for a few days or frozen for a couple months.

Seared Scallops
Melt the butter and oil together in a large heavy skillet until very hot, but not smoking.  Rinse the scallops, pat very dry, and season generously with salt and pepper.  Add the scallops to the pan and cook for 2 to 3 minutes per side, or until caramelized on the outside and just slightly translucent in the center. 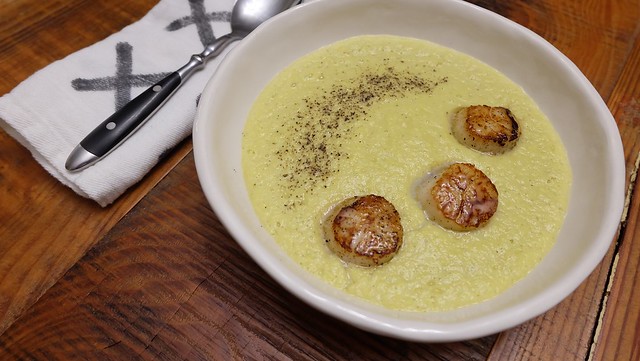 Posted by Vanessa Marie at 7:28 PM