This is not exactly a summer meal but it turned out so good I decided to post it anyhow.  My mom and I have a standing Saturday date at the farmer's market and this time of year in the PacNW it's a bounty that is all for the taking.  Every single stand looks like a picture out of a cookbook.  I had a hard time restraining myself.  One of the things I did end up with in my basket was some beautiful small eggplants. I always feel good buying these because they are DP's favorite vegetable.  To which I had two people exclaim to me on that same day, "Who's favorite vegetable is eggplant?!?"  He's an odd bird that one.  Fortunately, I like eggplant too so I was on my way to something good for dinner.

In the summertime I feel you can't go wrong with veggies and protein so I thought a meat stuffed eggplant sounded great.  I ended up finding a recipe out of the beautiful cookbook Jerusalem.  This one was for lamb stuffed eggplant and I'm not such a huge lamb fan, unlike Michelle.  So I substituted ground pork in its place.  I made a few other small adjustments.  Next time I think this would be even lovelier with a nice yogurt sauce spooned on top.  Come fall I'll be giving it another go around. Here is the recipe as I made it.

Stuffed Eggplant with Pork
adapted from Jerusalem cookbook
Preheat the oven to 425.  Place the halved eggplants in a roasting pan with sides and brush with 2 tablespoon of the olive oil.  Sprinkle with salt and pepper and let roast for 20 minutes, until golden brown and then allow to cool slightly.

While the eggplants roast start making the filling.  Heat the remaining 1 tablespoon olive oil in a medium frying pan over medium heat. Mix together the cumin, paprika and cinnamon and add half of this mixture to the pan, along with the onions.  Cover over medium-high heat for about 8 minutes. stirring often.  Add the ground meat, pine nuts, parsley, tomato paste, 1 teaspoon of the sugar and salt and pepper.  Continue to cook and stir for another 8 minutes or until meat is cooked through.

Place the remaining spice mix in a bowl and add the water, lemon juice, tamarind paste, cinnamon sticks, a sprinkle of salt and the remaining sugar.  Stir well.

Reduce the oven temperature to 375.  Pour the spice mixture into the bottom of the pan.  Spoon the meat mixture into each eggplant, heaping.  Cover tightly with foil and return to the oven for 1 1/2 hours.  Twice during cooking baste the eggplants with the sauce and add more water if it starts to dry out.  The eggplants should be completely soft at the end.  Serve warm or even at room temperature. 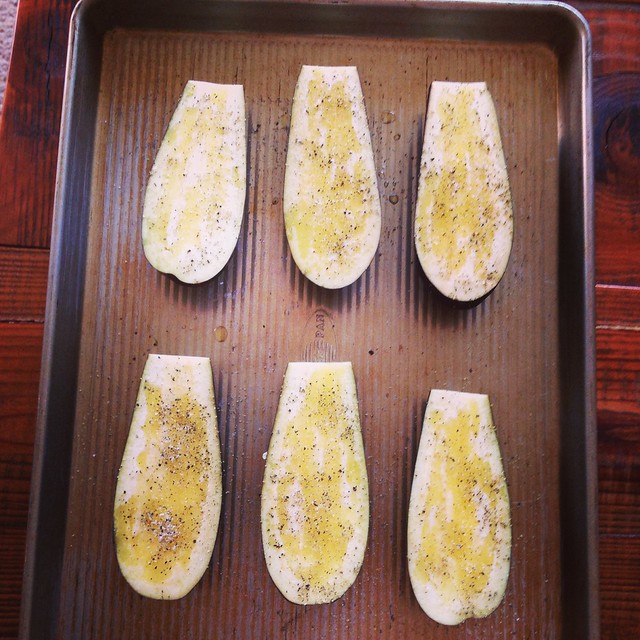 I totally failed at taking a final picture - whoops.

Posted by Vanessa Marie at 2:00 PM