I know what you're thinking.  That this recipe sounds either too boring or exactly like something you've made before.  But hear me out because I happen to think this is one of the most perfect soups I've ever made.  That's a bold statement, yes, but it's true.

When I think of my most perfect soup I have a lot of items that need checking off the list.  First, it must be fairly easy because let's be real here, soup should not be something that you slave for hours over. Which in and of itself might be why it's one of the more perfect dinners to make.  Then I want it to be healthy, lots of veggies and not too much fat.  But at the same time it needs to be rich and interesting and flavorful.  Then, and I know this makes me sound crazy, but I want the soup to be creamy and have some bite to it all at the same time.  I am one demanding soup eater.  But this recipe, well it has it all.  It even has just the right amount of spice to it as well.  Have I hooked you yet?  I hope so because I waited until the end of this post to tell you that this recipe is also vegan and gluten free.  Hook, line and sinker.

Below is the recipe as I made it but if you don't care about being vegan I think adding some ground sausage to the recipe would work marvelously.  Just brown the meat as the very first step, set it aside, and add back in at the very end.  You can use the fat rendered from the sausage in place of the oil to char the cauliflower in.  And also, I used gluten free bread for the gremolata because I had some left over but regular day old bread works just as well here.  Enjoy!

Heat olive oil in dutch oven over high heat.  Add cauliflower and cook, stirring often until charred on most sides, about 10 minutes.  Reduce heat if it starts to burn or smoke.  Reduce heat to medium low and add onions.  Cook until soft and translucent, about 2 minutes.  Add garlic and chipotles and cook 2 more minutes.  Add half of broth and bring to a boil.  Cook until cauliflower is soft, about 5 minutes.  Using a hand blender puree mixture completely until all chunks are gone.  Add remaining broth, potatoes, kale and bay leaves.  Bring to a boil over high heat, reduce to a simmer and cook until potatoes can be easily smashed, about 30 minutes.  Remove bay leaves and smash potatoes with a spoon to your liking.  Serve with the gremolata below, and maybe some Parmesan cheese if you'd like.

Gremolata Breadcrumbs
Add bread to a food processor and process until it turns to breadcrumbs.  Add garlic, lemon zest and parsley.  Pulse until mixed in and chopped fine.  With the processor on slowly stream in olive oil until bread crumbs are coated but not drenched. 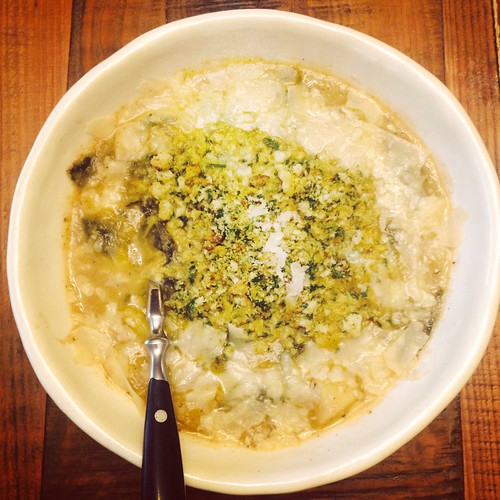 Posted by Vanessa Marie at 1:55 PM