Even though the original recipe did not come from a Portlander I ended up thinking how quintessentially Portland this gumbo ended up being.  It's definitely not traditional and with the addition of quinoa instead of rice and oil instead of butter it felt healthier and a bit modernized.  While we really enjoyed the end product a lot I think there are a few additional tweaks I'd make for the next round but this recipe is a great jumping off point.

The dish wasn't too spicy but for those who want an extra kick you can easily add hot sauce or a spicy pepper to the bell pepper mix.  I personally loved the crab meat and shrimp in it but next time I will also add an Andouille sausage to round out the meat profile and to also kick up the spice.  For a week night meal I also love recipes where the chopping is kept to a minimum and this fits the bill with only one chopping step and the rest comes together in a cinch.

When I originally read the recipe I saw that one of the ingredients was file powder.  Now being someone who wasn't raised anywhere near the south I thought that was a misprint.  Then when preparing my shopping list I figured it was another name for some spice I probably already owned.  Boy was I wrong when I looked it up and discovered that file powder is a spicy herb made from dried and ground leaves of the sassafrass tree.  That was intriguing and I'm definitely going to try it out next time I prepare gumbo!

I changed some of the cooking times from the original recipe. Below as I made it.  Enjoy!

Dice up the bell peppers and set aside. Combine the oil and flour in a large soup pot or dutch oven over medium-low heat. Cook, whisking constantly, for about 10 minutes or until it's dark brown. Carefully add the bell peppers, okra, gumbo seasoning and cayenne pepper. Give it a good stir and let the vegetables cook for about 5 minutes or until softened.  Add the tomatoes and chicken broth, bring to a boil.

Start cooking your quinoa according the package instructions in a separate sauce pan.  Once the gumbo is boiling add the shrimp and cook for 5-7 minutes or until pink.  Add the crab meat and reduce to a simmer for 30 minutes or until thickened.  Remove from heat and add the fresh parsley.  Serve with cooked quinoa and file powder. 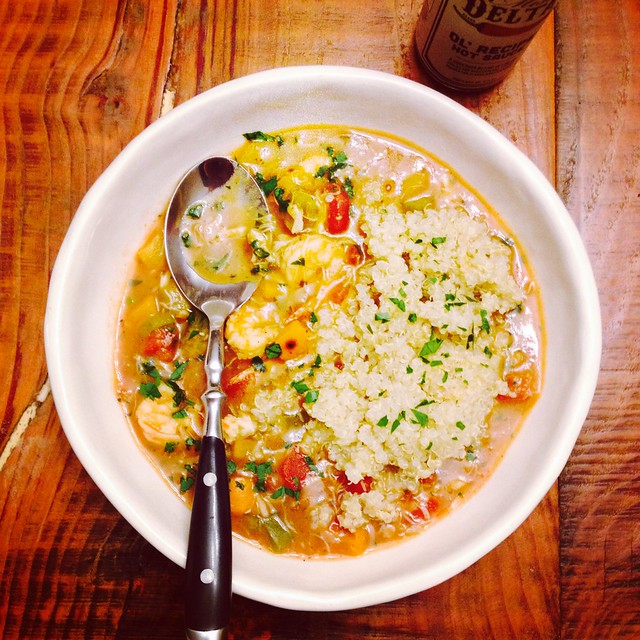