As some of you may have gathered from the posts below and from Michelle's real time belly-aching, I suck at posting to this blog. Not for lack of wanting to. No no, never. It's more of a combination of thinking no one really cares and being the crazy perfectionist that I am and needing massive amounts of time to create the perfect first post. I've come back down to reality and realized that that doesn't really exist and blogs, if nothing else, are meant for all sorts of fools to spout all sorts of benign ramblings. Hence, I give you, CHICKEN TORTILLA SOUP.

We made this a few months ago and we're still talking about it. It might be the best soup we've made so far. Well, at least together. This was taken from the blog From the Gallery and we thought it was fantastic just the way it is. Easy and cheap.

Method
In a large pot saute the onion, garlic, chili peppers, and bell pepper with olive olive until soft.

Return the shredded chicken to the pot along with the corn and tomato paste and simmer 30 minutes.

While the soup is cooking heat 1-inch of canola oil in a skillet over medium-high heat. When the oil begins to smoke add the tortilla strips in batches and fry until crisp on all sides. Remove to a paper towel lined plate and sprinkle with salt. 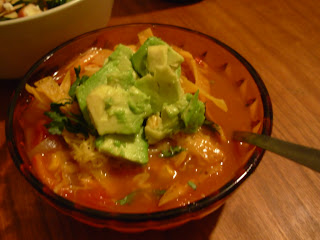 Also, from this recipe I was exposed to the beauty of poaching chicken. I had never worked with this method before but was most impressed at how juicy, tender and quick it was. Plus, no fat or oil is used in the cooking process. It comes out fairly flavorless though (if you're not cooking it in a soup) so I would recommend only poaching chicken to put in salads or other dishes, such as enchiladas!

Loose instructions:
Put chicken breast in a pot and cover with water. Add whatever seasonings you desire that will dissolve in water. You can use non-powder seasonings and bulkier flavorings if you like but it's suggested you then put them in a cheesecloth and tie them up before throwing it in. I'm not really sure I see the point in that as you drain the chicken anyway but I thought I might mention it for all you rule followers. Bring the pot to a boil and then simmer for roughly 15-20 minutes until chicken is cooked through. Drain from water and shred. Add or use in whatever dishes you like. I usually tailor the seasonings to what dish I'm using the chicken in, i.e. cumin, chili powder, garlic, salt and pepper if using in enchiladas.

et voila! That wasn't so scary. Maybe my next post won't be so far off.
Posted by Vanessa Marie at 4:29 PM